The following narratives depict real situations of Leiden & Leiden clients. The duty of confidentiality prohibits the disclosure of client information without prior consent, and the names of clients have been changed. The purpose of these narratives is to illustrate how financial difficulties may arise and what our firm can do to help.

Mark and Abby* are a young couple with two small children. Their financial troubles began when he was discharged from the military after 6 years of service. Their children were born shortly afterwards. Mark went to work as a delivery driver for a building materials company, but made substantially less than he did in the military. With reduced income and increased expenses, they struggled to meet their monthly bills. Realizing their predicament, they stopped using any of their credit cards. But the credit card debt which they had carried from early in their marriage soon escalated, as late fees and finance charges added up.

Soon the creditors were calling, and the phone calls began taking a toll on Abby, who had her hands full with the children. Eventually, the creditors began calling Mark on his job, and threatened to garnish his paycheck. Having enough of the threats and calls, they came in for a bankruptcy consultation. They rented a house, and owned a pair of older vehicles. By filing a Chapter 7 bankruptcy, they were able to stop the phone calls and harassment, and eliminate all of their credit card debt. 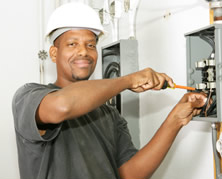 Doug* works as an electrician for a small contractor. After saving for several years, he purchased a house. A year later he purchased a new pickup truck, because he needed reliable transportation. He was current on the payments on both his truck and his house until he was injured when he fell out of his deer stand. He broke his leg and arm and was unable to work for 10 weeks. He did not have disability insurance, and his health insurance only covered about 80% of his medical bills. By the time that he returned to work, he was almost 3 months behind on his house and truck. In addition, he owed several thousand dollars worth of medical bills. Facing a repossession and foreclosure, he decided to come in for a bankruptcy consultation.

Since he had returned to work at his regular rate of pay, Doug was an excellent candidate for a Chapter 13 bankruptcy. The Chapter 13 plan which he filed allowed him to repay the past due mortgage payments over time, rather than all at once. The medical bills and truck payment were included in his Chapter 13 plan as well. He continued to make the regular mortgage payments which came due after he filed, and all of the other bills were paid through his court-supervised Chapter 13 plan by a Chapter 13 Trustee, with money that was deducted from Doug’s paycheck.

Grace* is a retired schoolteacher on a fixed income. Because of her health, she sold her home and moved in with her daughter. Grace had no debt but excellent credit due to her history of prompt payments on her mortgage. Because of her good credit, she was asked to cosign on a mobile home loan for her granddaughter, and a car loan for her grandson. Unfortunately, the mobile home was repossessed 2 years later after the granddaughter was divorced. The grandson’s car was repossessed after he lost his job. A substantial amount of debt was still owed after both the mobile home and car were sold at auction. Those creditors persisted in calling Grace about the deficiency claims, and her health worsened.

Grace filed a Chapter 7 bankruptcy to stop the harassment and eliminate the deficiency claims. Her social security and retirement income were exempt, which meant that they were protected in her bankruptcy.

Meredith* recently graduated from nursing school, and went to work for a local hospital. She received some financial aid when she was in school, but paid for most of it by obtaining student loans. She had also accumulated some credit card debt during school. She was injured in an automobile accident during her last year of school, when she didn’t have health insurance, which left her with approximately $2500 in medical bills. She made payment arrangements with all of her creditors, and was doing fine during her first few months of work.

Six months after graduation, her student loan payments came due. After she paid her utilities and other expenses, she barely had enough money left to pay her student loans. There was no money left for the credit cards and medical bills. While she was eligible to apply for a deferment of the student loans, she had already deferred several months while she was in school, and was hesitant to do so again. She began to dread going to the mailbox because of all of the collection notices, and was distracted at work because of her constant worry about how to pay the bills.

By filing a Chapter 7 bankruptcy, she was able to eliminate the credit card debt and medical bills. This left her with enough money each month to pay her student loans on a timely basis.

* Not their real names. The duty of confidentiality prohibits the disclosure of client information without prior consent. These depictions are for illustrative purposes only.