WHAT IS A NON-DISCHARGEABLE DEBT, AND HOW CAN IT AFFECT MY BANKRUPTCY CASE?

HomeNewsBankruptcyWHAT IS A NON-DISCHARGEABLE DEBT, AND HOW CAN...

WHAT IS A NON-DISCHARGEABLE DEBT, AND HOW CAN IT AFFECT MY BANKRUPTCY CASE? 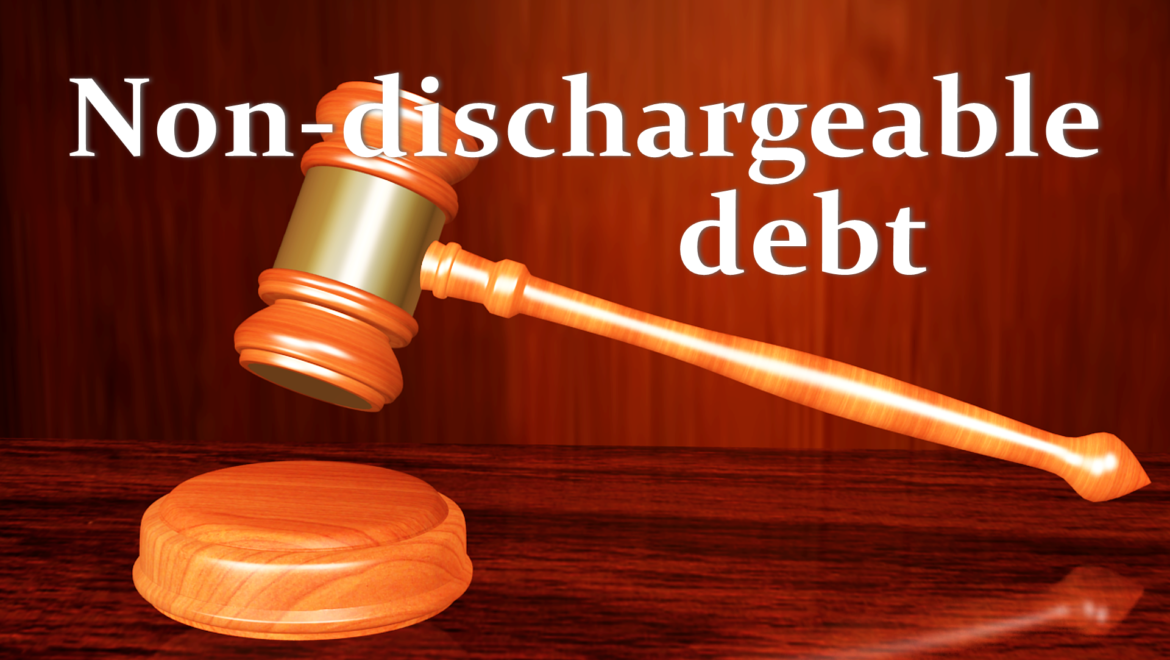 When a consumer files a bankruptcy case, all of their debts must be identified and listed in their bankruptcy petition. The Bankruptcy Code requires that all of your creditors must be notified of the bankruptcy filing. However, just because a debt is listed in the bankruptcy petition does not mean that it will be discharged. A debt that cannot be eliminated – referred to as a non-dischargeable debt – will survive the bankruptcy filing. The debtor will remain responsible for a non-dischargeable debt after the case is completed, and that debt can be collected in any manner allowed by law.

Some examples of non-dischargeable debts would include child support, alimony, educational loans, and some income tax debt. Congresses classified these debts as non-dischargeable based on public policy considerations, including the support of children, and access to a higher education. While these types of debts have been declared non-dischargeable by law, there are other debts which a debtor may not be able to discharge because of their conduct leading up to the bankruptcy filing. Criminal fines, probation fees and court ordered restitution are also included in the category of non-dischargeable debts. The rationale behind this policy is that a debtor must file a bankruptcy case with good faith, and clean hands, and will not be allowed to escape the consequences of their criminal conduct in a bankruptcy case. Government overpayments for benefits that are received based on a false or fraudulent application, such as Social Security, food stamps, unemployment or housing benefits may also survive a bankruptcy filing.

A debtor cannot discharge a debt that is obtained by fraud, or by making material misrepresentations in the process of applying for the debt. For instance, if a debtor intentionally and falsely claimed more income than they actually had, and the lender relied on that information in extending the loan, then that lender would be able to contest the discharge of its debt. The Bankruptcy Code does not want to reward debtors who have provided misleading or inaccurate information in order to obtain financing. Likewise, if a consumer applied for a loan for one purpose, but then used the proceeds of the loan for another purpose without the lender’s permission, the discharge of that debt may also be challenged. A common example of this type of conduct is a debtor who applies for a loan to refinance their car, but never actually pays off the car loan. This leaves the lender without any collateral for its loan. Obtaining a loan or any debt through identity fraud would also create a non-dischargeable debt. Obtaining significant cash advances on the credit card immediately prior to filing a bankruptcy can also be considered as fraudulent conduct.

Bankruptcy attorneys may ask specific questions and request additional information if a prospective client has any type of debts that would be considered non-dischargeable. It is important to be forthright and honest with the bankruptcy attorney during your consultation, so that the best possible advice can be provided regarding bankruptcy options. A debtor does not want to file a bankruptcy case only to find out later on that the debts which gave them the most concern will not be discharged. Attorneys are bound by the duty of confidentiality, so the client does not have anything to risk by providing full and candid disclosure regarding the origin of some of their debts. Additionally, even if you know that you owe a debt that will not be discharged, it is still important to disclose it to your attorney so that the bankruptcy petition will be complete and accurate. This is especially important because debts such as alimony or governmental fines will not show up on a credit report.